Beautiful Tunisia: A Call to Prayer

Update: This essay has been republished by Baptist Press. A few photos are newly added here.

Several years ago, alongside several other professors, Dr. John Mark Yeats and I led a group of students to Tunisia in order to study North African Christian history and theology. Today, we see occurring what the media has dubbed a "jasmine revolution," which is apparently the first populist rejection of an Arab leader and the first governmental change wrought through the activities of Wikileaks. President Zine el-Abidine Ben Ali, who is accused of having ruled Tunisia on behalf of the economic interests of what became known as "the Family," has fled the country. It is still unclear as to what the form and composition of the government will be, and the interim government itself has already changed structure in a matter of hours as the frantic search for constitutional legitimacy and political stability vie with one another.

The place known today as Tunisia has a long and colorful history. Phoenician traders settled here around the tenth century BC, establishing a colony that became the world power known as Carthage in the sixth century BC. The Carthaginian navy's capabilities, shrouded in secrecy, and the Carthaginian army's tactics, exemplified in Hannibal's surprise march through the Alps, were nothing short of brilliant, even as their religion was marked by incredible brutality. Phoenician ships brought a barbaric religion from the Middle East, which was affiliated with the god known in the Old Testament as Molech. Molech's priests were particularly adept at the sacrifice of infants by making them "pass through the fire." The Carthaginians sacrificed their own children to Kronos, or Saturn, according to ancient historians, by placing an infant on the hands of the bronze god, hands which were then raised by hidden priests through a pulley system, dropping the helpless child into a gaping maw to be consumed in flames. The bones of the infant would then be interred in a small stone sarcophogus, and were often deposited in the foundation of a new building, such as a private home. So many were sacrificed in the hope it would bring happiness and prosperity to a new family. (The Western idea that children are an economic burden worthy of abortion was thus prefigured.) Hundreds of children at a time were also sacrificed during times of war as a way to appease their offended god. The vigor with which the Israelite king Josiah suppressed such misguided brutality is, to say the least, understandable (2 Kings 23:10). To this day, I cannot forget the haunting scene of thousands of small stone sarcophogi still littering ancient Carthage outside modern Tunis. The children paid for the sins of their fathers, at their fathers' own hands. 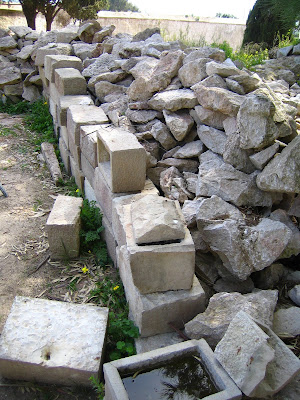 When, in the second century BC, the Romans finally put an end to Carthage at the conclusion of the third Punic War, they salted the site of the city but developed the rest of North Africa into a breadbasket for Rome itself. Roman culture followed Roman agriculture as it spread through North Africa, south toward that oceanic desert now known as the Sahara, east toward modern Libya and west into Algeria. Tunisia is filled with ancient sites containing coliseums, temples and palaces from the Roman period. The surviving mosaics that abound there are absolutely beautiful and indicate an advanced culture. Christianity thrived in the early centuries in North Africa, in spite of the intense persecution the Christians often suffered. The saga of Perpetua and Felicitas, two young Christian martyrs, still inspires those who read of the suffering of these faithful witnesses. (The ancient arena in which the Christians were martyred in Roman Carthage and many of the early churches are accessible today.) Providentially, in spite of the intent of the imperial authorities, the blood of the martyrs proved not to be the burial of the church of Jesus Christ, but the seed for her growth, as Tertullian noted.

As the church of North Africa grew in both difficult and easier times, it produced a number of very important theologians--especially Tertullian, Cyprian and Augustine--who shaped the way Western Christians still think about their faith. Tertullian, whose writings are available here in both the original Latin and modern translations, was a converted Roman lawyer active at the turn of the third century AD. This ground-breaking church father developed the rudiments of the Western understanding of the doctrine of the Trinity. His refutation of the modalist heresy has been most helpful to those who desire to see God as the Bible reveals Him to be. Tertullian also expressed misgivings about the innovative doctrine of infant baptism, even as he flirted with the spiritualistic and ascetic heresy of Montanism. The early churches of North Africa, many of whose ruins are still in existence, long retained the architecture of a New Testament faith. There is nothing more informative than seeing with one's own eyes the extant visible evidence of the North African baptistries standing, sometimes in the pattern of a womb, at the very entrances of their churches. Moreover, these earliest baptistries were fully immersionist. The late historical development of infant baptism with sprinkling is readily perceptible, for small raised baptismal fonts were centuries later placed in and over the old immersionist and often richly-decorated mosaic baptistries, the ruins of which have been preserved in the semi-desert open air. 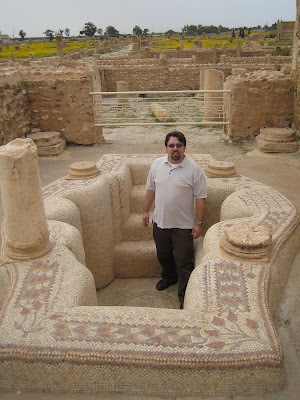 Cyprian, whose writings are available here, came from the Roman colonial elite itself and brought a stable leadership to a church experiencing even more thorough persecution under the emperors Decius and Valerian. After the Decian persecution, Cyprian led the way in providing church fellowship to those Christians who had lapsed under persecution but who subsequently repented. One of his most famous works, On the Unity of the Church, has been the source of both inspiration and tribulation for those churches dependent upon his theology of episcopacy, due to the work's existence in two variant forms. From a free church perspective, Cyprian's legacy is most difficult, for the doctrine of the priesthood of all believers offering spiritual sacrifices was lost in the midst of his advocacy of episcopal authority, sacerdotal administration of the sacraments and his peculiar sacrificial presentation of the Lord's Supper. On the other hand, encouraging all later Christians, Cyprian remained firm in his Christian faith and was executed in 258 for refusing to sacrifice to the imperial cult.

Though his bishopric was based over the border in modern Algeria, Augustine of Hippo, whose voluminous and theologically essential Latin works are available here and described here, spent a good deal of his life in Carthage. The mental portrait of Augustine's mother, Monica, standing at the dock as her son fled her presence for a profligate life in Europe, is one that should strike any Christian mother's heart. Be encouraged, Christian parents, for Monica's fervent prayers and continual witness ended in her son's glorious conversion. Augustine describes his conversion to Christ (and presents a sublime view of the relation between eternity and time) in his introspective and authentically open Confessions, a must read for every Christian. After his conversion, Augustine returned to North Africa, where his works were instrumental in helping Western Christians understand that salvation is entirely by divine grace, as he fought against the works-salvation taught by the British monk, Pelagius. Unfortunately, at the same time he underscored divine grace, he also led the church to embrace the conscience-violating doctrine of the baptismal regeneration of infants.

In yet another controversy, with the Donatists, Augustine argued for the universality and unity of the church, but horrifically through the advocacy of governmental coercion of unbelievers and dissenters into the state-supported churches. In yet another controversy, against the pagans, who were blaming the fall of Rome in 410 on the rise of Christianity, Augustine worked out a comprehensive philosophy of history, inclusive of both the sacred and secular. His monumental The City of God is simultaneously majestic and utterly persuasive. In his 15 books on The Trinity, Augustine established the Western view of the relations between the Father, the Son and the Holy Spirit, a view that ultimately ended in the theological division of East and West. Augustine's days ended as his city of Hippo was under siege by the invading barbarians, who would restructure and shape the Europe as we know it today. Augustine of North Africa remains the premiere theologian of Western Christianity, thus the faith of most Europeans and Americans remains in profound ways an African faith.

Although Constantinople under Justinian the Great recovered North Africa, the Byzantine empire could not retain its hold in the face of the onslaught of military Islam. Christians (and Jews) survived for centuries under Muslim rule, and huge Christian graveyards are still in evidence, but with time and the slow persecution of the dhimmitude system coupled with periodic onslaughts of intense persecution worsened by the invasion of the Sicilian Normans, Christianity (and Judaism) were eclipsed by Islam. I can still see the stone blocks with crosses on them that were torn from old churches and used to build mosques for the increasing number of Muslim people. As a French colony, Roman Catholic Christianity was revived, but, especially outside the capital of Tunis, there is not much that survives. During World War II, Rommel's troops battled with American and British armies for control of Tunisia and a large cemetery is maintained there to memorialize the multitude of Americans who gave their lives to push Hitler's Nazis out of Africa. Yes, the first (or, is it fourth?) "Star Wars" film was made in the Tunisian Sahara. And, yes, you can still visit the beaches that are traditionally swamped by European tourists. And, yes, the American ambassador at the time was a fine fellow and a gracious host to this American visitor.

As I survey the photographs of protest-torn Tunisia, I remember the beauty of the cities and, most importantly, the beauty of the people. I also remember the calls to prayer at the local mosque that wafted through our open windows every morning. But mostly, I remember that Tunisians are now suffering. There are many young people who need stable employment, and all Tunisians are doubtless concerned about what tomorrow will bring them. The people I encountered in Tunisia were kind and wanted to know about these wandering Christians, and, with appropriate prayer and cultural sensitivity, they were open to hearing the gospel. This brings us to the primary purpose for this post: Would you please pray for Tunisia? For her political freedom and stability? For the gospel of eternal peace, once again, to flourish in this beautiful land?
Posted by Malcolm Yarnell