And as they went to tell His disciples, behold, Jesus met them, saying, 'Rejoice!' So they came and held Him by the feet and worshiped Him (Matthew 28:9 NASB)

Sometimes, my friends and family are surprised at the intense passion this highly rational man can display when it comes to Jesus. Really, there should be no wonder about the matter, for the passionately reasonable faith I possess mirrors that of the first person to see Jesus after He arose from the dead.

Mary Magdalene initially appears in Luke 8, when she is noted as prominent among the women who supported the ministry of Jesus. The physician Luke informs us that Jesus had previously cast seven demons out of her. Demons are fallen angels, spiritual principalities and powers who rebelled against the rule of God in order to place one of their own in His place. Demons seek to rule the world through the perversion of truth and the subjugation of humanity. To be personally possessed by demons may result in personal harm at the bodily level, but demons also destabilize the human mind. Therefore, when Jesus cast out demons, He did so through intense prayer and powerful proclamation.

Mary knew Jesus primarily as 'Rabboni' ('Teacher'), indicating she knew Him as the one who liberated her with His words. Her mind was once under the sway of the false teachings of the ruler of this world. Then Jesus freed her through His own teaching, a teaching characterized by the authority of truth. Mary's mind had been released from the demonic powers active in this world's ideologies. Her conversion was a conversion to the highest of rationalities, the rationality of the creative Logos, who is the source of right reason. That Logos became flesh in Jesus in order to restore human beings such as Mary to their right minds.

As has been noted before, the courageous faithfulness of the women disciples stands in stark contrast to the cowardly disbelief of the male disciples during the crisis of the cross. Mary and the other women followers of Jesus were the last to leave the site of the crucifixion and burial of Jesus, and they seem to have departed only because they were compelled to obey the Lord's Sabbath ordinance. Moreover, they were the first to arrive on the morning after the Sabbath to minister to His body.

Over against such faithful devotion, Peter--the man who claimed he would stand with Jesus until the end--fled before the mob, denied his Lord three times, and withdrew from the scene to weep with guilt. The other disciples, too, ran for their lives. John was the male disciple who seems to have stayed long enough to be commissioned to care for Jesus' earthly mother. Perhaps their nonthreatening presence preserved the women from Roman and Jewish hostility, or maybe there really was a personal fortitude among the women that their public leadership currently lacked. Before the sun came up, out of devotion to the Man who released her from the grip of ideological bondage, Mary led the other women to take spices and prepare his body for permanent burial.

But when the women arrived at the tomb, their world was turned upside down. An angel, emitting the light of heavenly glory, descended to roll away the large stone covering the tomb. The earth shook under the electric might of this angelic act. And the professional soldiers guarding the tomb, men who knew power and how to use and abuse it, were debilitated. Heaven's display of shock and awe left them paralyzed. This woman, once tormented by the deceptions of fallen angels, now witnessed the power of 'an angel of the Lord'. She was frightened, too, but this angel spoke words of comfort and of transformative importance to her. This angel was different, for his power was submitted to the Lord who had liberated her.

The angel told her not to be afraid. He knew that she was coming to take care of His crucified body. But there was no need for that anymore, because His body was not here. Why? He was no longer dead. 'He is risen, as He said!' Through her keen mind rushed those words that Jesus had told His disciples before this week had begun. He had warned them that He would be betrayed, that He would suffer at the hands of the elders and chief priests, and that He would die. But He also said that on the third day He would arise from the dead. Had He done what He said He would do? Had Jesus embraced death and walked right back through it into life?

As if sensing her wavering over the unprecedented nature of the Lord's resurrection, the angel invited Mary to see where Jesus had lain. As she looked in, she knew there was something intentional about this raising from the dead. When Lazarus had been raised from death by Jesus, Lazarus needed assistance to be unbound. But Jesus conquered death on His own through the divine power of His Holy Spirit and thus needed no assistance. Moreover, Jesus folded the expensive linen and placed it neatly aside, indicating His approval of the goodness of restored creation.

Finally, the angel of the Lord over life and death told Mary Magdalene to go tell the disciples, 'He is risen from the dead!' The disciples must, therefore, go to meet Him where He appointed them to gather in Galilee. There, they would see Him and have their questions answered. Of course, we know Galilee would also be the venue for the disciples to receive the Great Commission, which has defined the purpose of the Christian life on earth ever since.

Marveling over these unprecedented events, trying to make logical sense of what she had seen and heard, Mary and her companions immediately set out to find the disciples. Mary obeyed the angel and went to seek out the men who were to lead the new faith, the faith in the living Lord who had conquered death. With tears in her eyes, Mary ran into another man. At first, she thought this man was the gardener and with humble apology, she asked where she might find Jesus' body. Really, she did not want to bother anybody. She just wanted to take care of His broken, lifeless body.

Then, He spoke to her. We can hear Him saying to her, 'Mary,' with the gentle power that only He possesses. Her capacious mind remembered all the times Jesus had taught her the truth, and it suddenly dawned on her that the gardener was no anonymous gardener at all. He had said her name in the familiar way that only He could say it. And her world was changed in a moment. THE ONE SHE THOUGHT WAS DEAD WAS NOW ALIVE! Death was transformed into life! Hopelessness was changed into hope! Untold fear was turned into unlimited joy! Her mind cried out with her voice to the Master who is Reason Himself, and with the greatest passion in the world, she fell at His feet to cling to Him for all she was worth. 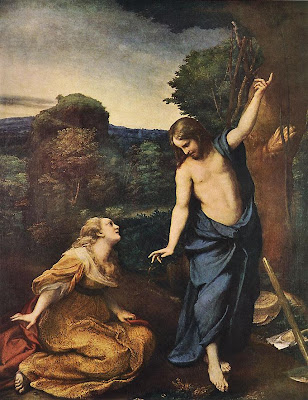 Twice in my own life, I have seen a person fall and grasp the feet of another. Such an act is unusual. It is an act of chaste intimacy; it is an act of love; it is an act of hope. Once, I saw a distraught woman cling to the legs of a husband who decided to walk away from a lifelong commitment. Another time, I saw a man kicking his wife with cowboy boots. As I ran to grab him and stop this vicious act, the man's little girl leaped on his feet, hoping to protect her mother. Such an act is unusual. When the Magdalene grabbed her Risen Lord's feet--and she was not alone among the women disciples in doing so--she was telling the Lord she never wanted to depart from Him again.

Moreover, these perfectly orthodox women rendered that thing which human beings render only to God: they 'worshiped' Him. At that moment, the faith of these women became the faith of the first Christians. They had personally witnessed His death for the sins of mankind, they had personally heard the Gospel of His resurrection from the angel, and now they personally gave their homage to this Man, the God-Man, their Teacher, their Lord, their Savior. These women were the first Christians, because they were the first to believe that God had come in Christ Jesus, had died, and had risen from the dead. Jesus commanded them to do what they were already beginning to do: 'Rejoice!' He then untangled His feet from their hands, letting them know there was much to do, and warning them He would ascend to the Father.

And for nearly a whole day, the faith that saves humanity was exclusively the faith of these women. The Gospels tell us that the women went and told the disciples, but they did not believe, assuming these women were just relaying 'idle tales'. Later, after Jesus appeared to two men, Simon and Cleopas, that evening at the inn at Emmaus, they raced the seven miles back to Jerusalem to tell the disciples, but they still did not believe. Only late in the evening, when they had shut the doors for fear of the Jews, Jesus Himself appeared in His resurrected body to the disciples. Jesus rebuked their unbelieving, hard hearts. At last, they believed. And one of them, Thomas, took another day to meet Jesus, but when this doubter did finally see Jesus, with his hand in the Teacher's side, he cried out with the reasonable faith of Mary Magdalene, 'My Lord and my God!'

Some people assume that reasonableness and faith are anathema to one another. Certainly, there is a difference between reason and faith. Faith, according to Hebrews 11:1, is 'the substance of things hoped for, the evidence of things not seen.' Faith, in other words, will always require what Soren Kierkegaard referred to in terms of an existential leap. However, faith is, nevertheless, substantial, and faith is based upon evidence, even as it is temporarily formed in hope. The faith of Mary Magdalene was a supremely reasonable faith even as it was a supremely passionate faith. She was not embracing idle tales, unreasonable fables. She had been there and done that and wanted no more falsehood.

No, Mary Magdalene was reasonably passionate and passionately reasonable, because the One who is Reason Himself was the One who suffered the greatest Passion on her behalf. She saw Him die with her own eyes, a spear in His heart, and she saw Him alive again, and she believed. Her faith is my faith, and together, we are quite passionate and quite reasonable about Jesus Christ, the Risen Lord. And like her, I look forward to the day when I can fall at His feet, weeping in worship, and beg Him for the privilege of always living in His presence. Noli me tangere no more.

NOTE: This is the third and final installment of three reflections on Holy Week. Please go here for the first reflection, on Good Friday, and here for the second, on Holy Saturday.
Posted by Malcolm Yarnell